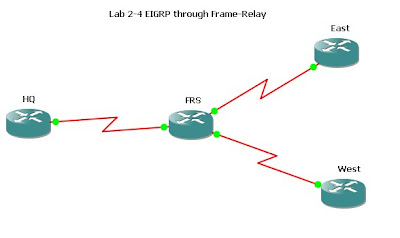 I spent a little time this afternoon going over the next EIGRP lab in the CCNP Lab Portfolio. I learned some useful types regarding EIGRP and how it works over Frame. For the most part you can configure EIGRP as normal but EIGRP works off of split-horizon rules. Split horizon pretty much tells a router not advertise a route out of the same interface that it learned the route from to begin with. There for in the diagram router West and East didn't know about each other due to not being able to advertise the same route back to HQ. To get past this, I had to turn of split horizon on the HQ router with the following command:

Once I entered this command under the EIGRP configuration, sure enough all routes came right up!
Posted by Shawn Moore's Cisco Trek at 5:22 PM