End of the EIGRP Chapter (TCP/IP Vol I) 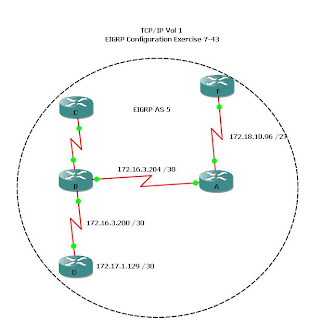 I cruised through the EIGRP chapter which refreshed my memory on a bunch of topics that escaped me. Such as the default metric calculations used when calculating the best routes along with topics such as Feasible Successors, SIA (Stuck-in-Active), and k values. I went through the configuration exercises which were surprisingly not that complex considering the book is supposed to help prepare you for CCIE. All they asked were to configure 5 routers with EIGRP using the process-id 5, create a authentication key between router A and B, and summarize the routes as much as possible.

Tomorrow I'll knock out the troubleshooting section and report back on what that was like time permitting. This has been one of the most helpful chapters so far since we still use EIGRP in our network but not near as much since migrating to a different vendor which uses strictly BGP for connecting WAN's.
Posted by Shawn Moore's Cisco Trek at 6:38 PM 1 comment:

I briefly went through the RIPv2 review questions,configuration labs, and troubleshooting exercises over the last few days in the TCP/IP Vol 1 book. I also went through the basics and beginning of IGRP and how it moved to EIGRP. I will be spending the next week or so going through the this chapter so you may not see a post from me until then when I reach the configuration exercises. In other news I'll be moving soon so you really may not see a post until about 3 weeks or so due to the craziness going on right now!
Posted by Shawn Moore's Cisco Trek at 9:26 PM 3 comments: 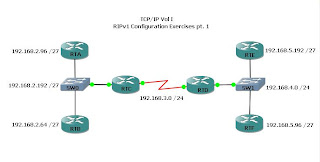 Today's lab involved RIPv1, 6 routers, 2 switches, and 4 configuration tasks. All together the lab was around an hour. The first part was to simply configure the network for RIPv1, simple enough. It's nice not having to mess with static routes all over the place! The next task was make the serial link between RTC and RTD send unicast updates rather than broadcasts. I did this by configuring the serial interfaces as passive along with setting up RTC/RTD with neighbor commands.

Next up was too change how often RTC and RTD sent each other updates, this was done with the timer basic command. I picked some random timers and used the ? command to help me a little. I set this across the board on all 6 routers because from what I understand the timers have to be universal across the network in order to work., someone correct me if I'm wrong though. The last task was to prevent RTA from talking to the 192.168.4.0 network and RTB from talking to the 192.168.5.0 network. I used an access-list and the off-set command. I told both routers that on any incoming RIP update for the particular network listed in their access-list, set the hop count to 16 or invalid. 16 hops is considered an invalid/infinite route with RIP.
Posted by Shawn Moore's Cisco Trek at 7:21 PM No comments: