Today I wrapped up the last bit of configuration I needed to do to complete my CCNA:Voice lab setup (besides Unity Express). I am now able to place calls not only internally but also to my remote site via a PSTN connection. I have four more chapters to go and then it's time to review and prepare for the test. I want to take and pass the exam sooner than later because the certification is being completely revamped and I only have until February 28th to take to current version. I already feel pretty confident, especially after I was able to finally dig into dial-peers and the many ways you can manipulate them.
Posted by Shawn Moore's Cisco Trek at 12:47 PM No comments:

With most business that integrate VoIP into their network, they not use VoIP technology within their own LAN but also across WAN's to remote sites, other businesses, ISP's, etc. There are a few popular voice trunking protocols to pick from and I'm starting to learn the history and details behind each. There are four voice gateway protocols that I hear and see configured quite a bit in the voice networks I've seen so far.

1. H.323: This is a pretty mature and older voice protocol that was created primarily for connecting to other networks using the ISDN connection. This doesn't surprise me as I see this used mainly on PSTN connections to ISP's. While the protocol is pretty stable, there are a lot of features newer protocols handle better along with being easier to manage. When I run the debug command debug isdn q931 on a gateway, the information is usually pretty cryptic and hard to undertstand.

2. MGCP: I see this protocol used all the time in the Cisco VoIP networks, apparently Cisco is really the only vendor that uses this protocol even though it's an open standard. MGCP is a centralized based configuration.

3. SCCP: Again this is only on Cisco VoIP networks because this is Cisco's proprietary protocol. This protocol is used specifically for communication with Cisco IP Phones and other Cisco endpoints such as ATA's.

4. SIP: This is the new kid on the block and it's still being developed constantly. SIP is basically a lighter and more feature rich version of H.323. Except that it is based on VoIP instead of ISDN, it uses a lot of the same standards that HTTP uses which makes it a lot simpler to develop. I haven't touched SIP yet but I've heard a LOT about it. There's actually a forum that is very involved with this new protocol, check it out at www.sipforum.org
Posted by Shawn Moore's Cisco Trek at 2:36 PM 1 comment:

First Hands on With QoS 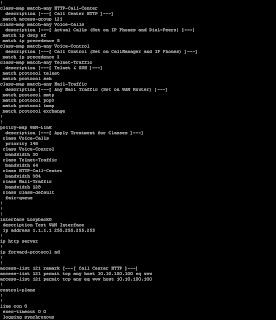 As I dive deeper into the VoIP world, I'm starting to learn just how important QoS (Quality of Service) is in a network. QoS is a complicated topic and for good reason, not only because the configuration can be quite involved, but also their can be a lot of corporate politics involved. QoS comes into play when a network is congested, instead of having a router just drop random packets that it can't route you can prioritize which specific packets should be sent from most important to least important. With the least important being sent to the "bit bucket (gone forever)" most likely. With this said RTP voice traffic is very time sensitive, when there is latency it upsets the way it is sent to the receiving end and in turn usually upsets the end user as it can cause echoing, dropped calls, and a plethora of other issues.

You should prioritize voice and video traffic before other traffic in most environments...well unless the CEO steps in and demands that his e-mail and internet traffic is more important than any other traffic! There are essentially 3 steps to configuring QoS:

1. Identify and match packets with the class-map command
2. Prioritize traffic with the policy-map command
3. Assign the QoS policy to the impacted interface with the service-policy command

You can see a sample configuration in the picture above that I was messing around with in GNS3.
Posted by Shawn Moore's Cisco Trek at 12:15 PM No comments:

The Many CME Phone Features 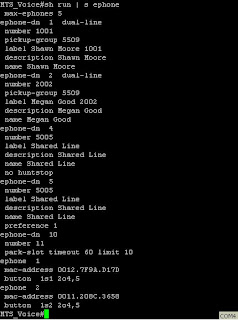 Over the last few weeks I've been reading and toying with the many different phone feature settings that you can configure through CME. While there are still many options I haven't covered quite yet such as Intercom, Music On Hold, and Paging, I've learned a lot about what you can do using the ephone commands on the CME gateway. By far the most confusing part for me has been the configuration of hunt groups and how to route and stop the calls within hunt groups and to other hunt groups. It's a lot easier to understand when you're looking at a full Call Manager GUI rather than from ephone-dn commands!
Posted by Shawn Moore's Cisco Trek at 11:06 AM No comments: