Well that's it, not too long of a list. I have even more goals for 2018, don't worry I'll be sharing them in the near future. Let me know what your 2017 were and if you completed your all of your goals below!
Posted by Shawn Moore's Cisco Trek at 7:00 AM 3 comments:


Now it's time to collect my notes from CBT and move on to the reading portion. Below are some high level notes I've taken:

How to Trick your VPC into Acting Like a Service Provider

So how do you solve the issue of routing traffic through a remote VPC to reach another remote network?

Picture the following example, you have your VPC and you have a business partner with their own VPC. You successfully have a VPC peering configured, bidirectional communication, and life is good:

This is where you'll run into an issue, by default Amazon does not allow traffic not originated from within a VPC to be routed out of its own network. Essentially you're not allowed to use a VPC as transit network (i.e. routing traffic through a BGP AS). Which is understandable as the last thing Amazon need is customers causing routing loops within their cloud environment. To get around this issue, you'll want to use what's called a Transit VPC.

This VPC functions as a hub for both VPC's and outside networks to route traffic to and from each other. Two Cisco ISR's (1000v) function as the back bone for this VPC. These two virtual routers are used for VPN termination, routing, and high availability. From what I understand these Cisco routers have most of the traditional Cisco IOS XE feature set. So maybe you can get creative with using DMVPN, FlexVPN, etc. for additionally dynamic capabilities. 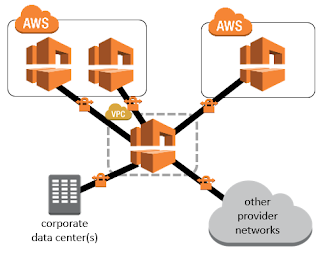 Like anything Cisco though, you do have to pay a premium for this service. However it appears that this is not only the best choice but probably the easiest to implement.

Have you ran into crazy routing scenarios you've had to get around in a cloud or hybrid environment? Would love to hear your war stories and solutions in the comments below:

While AWS is great for quickly provisioning servers and networks without worrying about the back end hardware, there are a few caveats to be aware of. A big one is who's responsible for what in Amazon's Cloud environment? Not really meant to be loaded question, it's important to understand that Amazon can not be held liable for your everything in your custom cloud architecture.

Below are some items you are responsible for within their infrastructure:


Amazon is responsible for items such as:


Neither list above is comprehensive but does give you an idea on what you the customer will need to protect on your own. Even something such as login access to your instances is your responsibility. If you happen to loose your private key to an instance, there's not much Amazon can do for you as an example (easy to resolve that problem I know). For the most part if it's anything that's physical or layer 2, you can probably bet that Amazon handles that portion of the cloud.

Hopes this helps, anything else I should add to the list above? Let me know in the comment section below!
Posted by Shawn at 6:33 PM 4 comments:

I've finished my work provided LMS video series last week and now I'm powering through CBT Nuggets at a fairly fast clip. I estimate that within two weeks I'll be complete with the Nuggets training as well. What's great about learning Cloud is how quick you can ramp up a lab environment as mentioned in my last post. It's really supercharging the time it usually takes to pick up a new technical skill.


To be honest, I'm most excited about the Udemy course as I hear it's very hands on and closely relates to the exam itself. That's also the main reason that I'm saving that piece for last. But using books on Safari always allows me to deep dive into the technology at hand which is why it's included in my study plan.

This is all perfect timing as I'm getting thrown into a few interesting AWS projects. One is how to get around some of the AWS networking limitations. We're needing to communicate between potentially dozens if not hundreds of VPC's due to our engineering testing. How do we accomplish this at scale? How do we limit the time for deployment? How can we make it simple to implement along with using our own proprietary instances? There's a lot of questions to be solved for and this isn't including business aspect of things such as cost (of course) and personnel resource requirements.

I would love to hear other opinions on rather you think the "Cloud" is hear to stay? If you think so, what are you doing to prepare for it? Talk to you all soon
Posted by Shawn at 7:51 AM 5 comments: