Beginning The Setup of My Voice Network 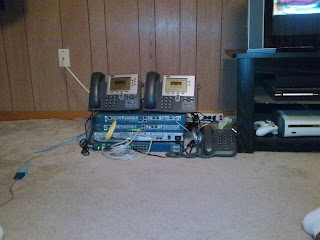 I've been really busy over the last few months with this one being the busiest with me working 16-22 hour days. This is due in part of me installing and bringing up new networks for a few of our remote sites that's growing in size. I'll be in St. Paul MN this Wednesday and won't be back until Tuesday of next week if all goes well. I finally had a little downtime to get some studying in. After about 1 month of researching and about $700 later I had purchased everything I needed for my CCNA: Voice lab. 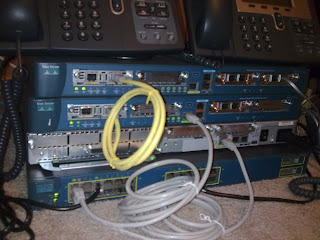 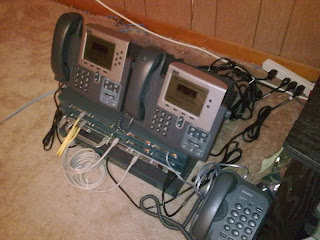 After I plugged everything in I did some of the initial configuration based on the CBTNuggets CCNA: Voice videos. I ran into an issue that stumped me for a long time however which was due to none of my phones or PC was receiving an IP address from the DHCP server I configured on my 2620 router. It turns out that my 7960 and 7940 didn't like the simplified vlan configurations much on my switch.

I had the following configured at first:

I had to change the configuration to the old way:

Once I added this all my devices starting picking up IP addresses. The only thing I can think of at this point is that maybe the older IP Phones don't accept the new way of switch vlan configuration but I'm sure I'm wrong and may be missing something.