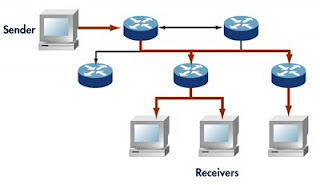 I'm nearing the end of my CCNP Study Guide Book, with only this chapter on multicasting and the last chapter on IPv6 to go. Multicasting enables data to be sent over networks to a group of destinations in the most efficient way. The data is sent from the source as one stream; this single data stream travels through the network. Other network devices only replicate the data through the network if they have other members on their interfaces that are apart of this destination group.

Multicast groups are identified by Class D IP addresses, which are in the range from 224.0.0.0 to 239.255.255.255. Muticast uses the Internet Group Management Protocol (IGMP) and Cisco Group Management Protocol (CGMP) for determining which network devices require the multicast data stream. Protocol Independent Multicast (PIM) is used for determining the best way to route multicast traffic.

There are many differences between Multicast and Unicast packets. Unicast duplicates a packet for each reciever that it needs to send the data too (one copy for each reciver). Multicast sends one packet stream as mentioned previously, downstream routers replicate the packets only on links where receiving hosts exist. Multicast provides the following advantages over unicast:

The disadvantage of multicast is that it uses UDP (User Datagram Protocol) as it's transport protocol. This means that packets are only sent on "best-effort" delivery and that packets aren't sent reliably. In order to cut down on unreliable packets, the multicast applications them selves may need to provide some sort of reliability mechanisms to prevent huge data lost. This could mean more processing power needed on the hosts them selves.
Posted by Shawn Moore's Cisco Trek at 12:00 PM