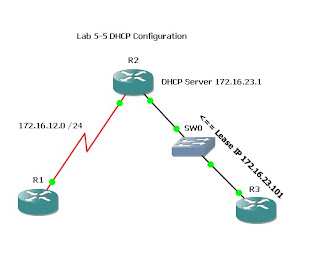 I spent this morning reviewing DHCP router configuration and the many options that you have as a DHCP server. From what I've seen in real networks most routers won't utilize DHCP configuration unless it's for a smaller network using a Cisco 1841 or something similar. The bigger enterprise routers are usually deployed in bigger environments where there are already dedicated DHCP server(s) in place. I did learn a command that would of helped me tremendously during my CCNA studies.

To all the people studying for the CCNA try out this command on a router and you'll get a nice surprise:

Yup that's right, you get a complete list of the most common TCP and UDP ports used, very handy for the CCNA exam or just for a quick reference!

Posted by Shawn Moore's Cisco Trek at 1:36 PM No comments: 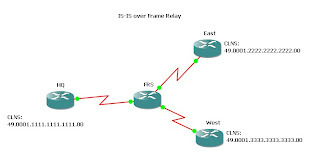 I knocked out the last of the IS IS topics in the CCNP Lab Portfolio finally. One interesting caveat about IS-IS and NBMA (Non-Broadcast Multi Access) networks is that it can only perform as point-to-point connections. Which is very different from OSPF that can use different NBMA technologies such as multi-point. Tomorrow I begin the different routing manipulation topics that's a HUGE part of the exam I hear.
Posted by Shawn Moore's Cisco Trek at 11:15 AM No comments:

I'm about half way through the CCNP lab portfolio book finally. I started on the first IS-IS lab presented in the book and it refreshed my memory on a lot of the IS-IS topics which I can honestly say that I forgot. The lab was focused on the basics and the end goal was to setup an IS-iS lab where the core network was running as an IS-IS level 2 network. The other goal was to implement security measures to prevent rouge outside networks/routers from trying to create an adjacency to the current IS-IS network which was pretty straight forward. I plan on completing the IS IS portion of this book within the next week or two, I'm working overtime at the NOC this upcoming week so we'll see how far will get by this time next week rolls around!
Posted by Shawn Moore's Cisco Trek at 11:44 AM No comments: 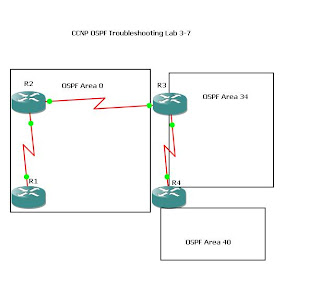 All of this studying and labs (lots and lots of labs) are starting to pay off. I'm finally starting to grasp many of the CCNP routing topics without having to reference a book or look up how to configure certain commands. I went through the OSPF challenge lab and was able to knock it out in about 20 minutes which is pretty good. One thing about troubleshooting networks is that you can gain a lot of information just from looking at the running configurations and the ip routing table. Looking at the device log (show logging) helps you determine what happened and when, this is very helpful in real world environments. Next up is IS-IS and then the redistribution chapters which is gonna teach me a lot of new techniques I bet!
Posted by Shawn Moore's Cisco Trek at 3:35 PM No comments: 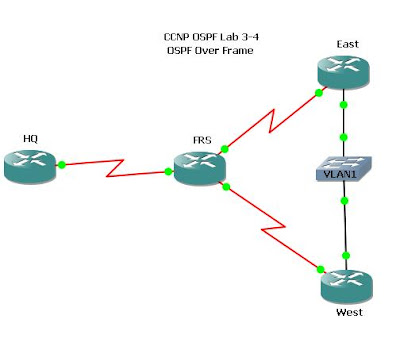 Today worked through the CCNP Portfolio lab 3-4 which has to do with OSPF over frame relay. This lab was mostly review for though. I did finally bit the bullet and learn how to setup a Cisco router as a frame-relay switch finally. I always used the frame relay icon in GNS3 for all of my frame relay studies. It was fairly straight forward, just mainly pointing the DLCI's where they need to go and configuring the serial interfaces for frame DCE connections was all that was needed really. I also went through some of the different type of OSPF NBMA topologies you can configure, such as point-to-multipoint or creating neighbor connections through the OSPF configuration.
Posted by Shawn Moore's Cisco Trek at 2:14 PM No comments: